Celebrating Flag Day and the U.S. Army Birthday Next Week 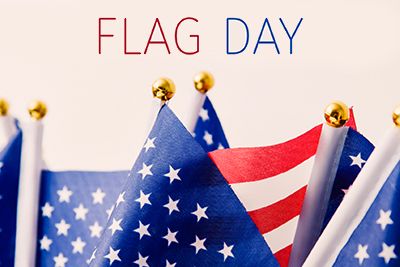 Wednesday, June 14, is Flag Day, commemorating the 1777 adoption of the United States’ flag. As a revered symbol of freedom and justice, the flag of the United States of America is to be shown the utmost respect. However, Flag Day isn’t a federal holiday.

The respect of the flag also extends to its eventual retirement. The United States Flag Code states, "The Flag, when it is in such condition that it is no longer a fitting emblem of display, should be destroyed in a dignified way, preferably by burning."

If you have flags to be retired, the following organizations collect them for disposal:

Contrary to popular belief, burning is not the only way that a flag can be disposed. The United States Flag Code dictates burning is only the preferred method of disposal. As long you retire the flag with respect and dignity, an alternate method is acceptable.

To bury the flag, begin with a dignified wooden box of good quality and construction, as this box will serve as the flag's vessel as it is interred. Fold the flag respectfully, place it in the box and bury the flag in the earth. You may choose to mark the burial location of the flag with a small, respectful wooden or stone marker.

Before burying the flag, you may also shred it. Shredding an American flag may at first seem violent or undignified. However, if burning the flag isn't possible, the U.S. Army's Heraldry Institute recommends shredding as an acceptable disposal method, provided it’s done with reverence.

Use scissors to slowly and methodically separate the thirteen stripes, leaving the blue star-spangled field intact. After the flag is completely cut into pieces, place it in a respectful receptacle and bury it, or ceremoniously burn the pieces one by one, starting with the stripes and ending with the blue field.

Wednesday also marks the 242nd birthday of the United States' Army.Congress adopted the American Continental Army on that day in 1775. It's the day we celebrate the total Army force, comprised of multi-component soldiers as well as the civilians of the Department of the Army, and their contributions to national defense.

Do you have any flags that hold special meaning for you? Share with us in the comments! Thinking about looking for a new home because of a PCS move? Start your search with us!